Is “Helping” in Your Relationship Healthy?

Let’s say your boyfriend isn’t really sure what he wants to do with his life. His college diploma is sitting behind the dresser. He doesn’t know how he wants to use the Psychology degree he worked so hard for. You think he could do better than the low-wage night shift job he has now and think he has So Much Potential. He’s said before that he might be interested in graduate school. But he probably doesn’t have time to research them because of his work schedule, sleeping and playing video games. You think it would be a helpful gesture for you to research some programs, organize the information into a spreadsheet, and lovingly offer it to him. What if I told you that your desire to “help” your partner could really be a veiled attempt at controlling him? That probably wouldn’t seem true to you. At first.

Helping is a Problematic Relationship Issue?

Helping someone when they haven’t asked for it is sometimes a form of control. What are you trying to get by researching graduate programs for your boyfriend? Or by calling and scheduling a therapy appointment for him? Or by offering to pay his tuition? I bet you’ll say it’s altruism, that it’s about the other person in the relationship. However, there is an internal reward behind most the actions we take, even if it’s just a feeling. You want him to apply to graduate programs so that you’ll feel… proud? Will you feel more valued because you paid his tuition? Maybe these gestures are really more about you trying to feel better about yourself.

Controlling someone is different than gift-giving or performing acts of service for your partner.  Those gestures, like doing a chore for him while he’s busy, come from a place of love without attachment to an outcome. Healthy women don’t do those things in order to raise their self-esteem. When they offer to take out the trash for him while he’s working, they’re not doing it because they want him to behave differently. Maybe a litmus test help you discern the difference is to ask yourself, “How would I feel if he didn’t use this help I’m giving him?” If the answer is anything besides neutral (i.e., pissed, resentful, frustrated), you should do a little soul-searching to identify your motivation.

Imposing Help in a Relationship Can Be Disrespectful.

Respect your partner’s autonomy, his ability to solve his own problems and to ask for help when needed. He has the right to live as he sees fit. If you want to be with someone who is motivated to apply to graduate school, then go date someone who’s applying to graduate school. Don’t force things to be what they’re not.

As Melody Beattie writes in Codependent No More, “Face your fears about losing control. Gain control of yourself and your responsibilities. Free others to be who they are. In so doing, you will set yourself free.” 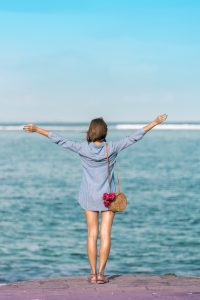 If you’ve been trying to control your partner and want help learning how to detach, please email me for a free consultation. We can start talking about your relationship issues and how to set yourself free from trying to “help” and “fix” others’ problems!