3 Reasons You Don’t Want Your Unhealthy Relationship to End

You might be a little in denial or all the way, head-under-the-covers denial that this relationship isn’t the one for you. Maybe it was a nasty fight that you’ve told yourself is a one-off, or maybe you’ve ignored that nagging discomfort for months, but either way, you’re committed to making this heading-for-disaster relationship work. Let’s look at three common reasons women don’t want relationships to end, even when an ending might be the most healing step for both partners.

I don’t want to fail.

Flash back to the fifth grade spelling bee when you misspelled “raspberry” or to your driver’s test when you just barely nudged that curb. What feelings do those events evoke?  Embarrassment, shame, a dark wave of disappointment. Society has conditioned us to be motivated by external accomplishments – grades, awards, accolades, promotions – and has labeled the lack thereof “failure.”  In the same way, romantic relationships have become valued like a plastic trophy placed on a shelf. There is social pressure for women to be in relationship, to “accomplish” being a partner to someone. Admitting that a relationship just isn’t right, especially a committed relationship, feels like the admonishing glare from the driver’s test lady. And so we stay and grind it out, lest we feel the opaque presence of disappointment. We want to win; we want that trophy.

Failure, particularly when it comes to exiting a sub-optimal relationship, is not a reflection of poor character or an inability to authentically connect. In reality, letting go of a relationship is more about understanding yourself intimately and listening to the part of you who knows what she wants. That is the part of you who is willing to wade through a thousand failed relationships to find the best one. To me, that is far from failure.

I don’t want to be alone.

This is a big one. Along with the heartache and grief of a breakup comes the fallout of being alone. You used to have a date to bring to your friend’s BBQ, even if the date was hardly better than warm coleslaw. Now you have zilch, nada, no one. You show up alone and awkwardly navigate the conversations with other people who have a smiling and nodding partner at their side. You watch “Stranger Things” on your own, and ok, are a little spooked by the Upside Down without someone to hold on to. I get it – most humans have a desire to connect and be seen and understood by a companion. But when the fear of being alone becomes the driving force in coupling, it could indicate a problem. More energy is expended on moving away from being alone rather than on moving toward a loving relationship. This difference might seem subtle, but it’s everything. Focus on shifting your mindset to what kinds of relationships you want to create in your life and see what happens.

I don’t want to start over.

You’ve put SO much time in to this relationship. You’ve talked and talked, and he knows all about how your uncle Fred hugs you just a little too long. He was there when you got the news about your cat’s terminal cancer, he knows to always grab you lentil soup when he goes out for Greek. He knows to give you space in the morning until y 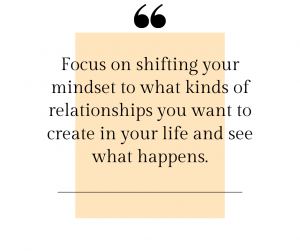 ou’ve had coffee, and he even went on your family’s last beach vacation (and talked to your sister for an hour about her latest backyard birding discoveries). How do you even start again, reveal yourself again, learn someone else’s quirks? It just takes too much time, energy, and vulnerability that you can’t muster, right? Let’s be real here: what you’ve got might not actually be that great. How important is it that he gets Uncle Fred when the Mister stonewalls you during an argument? That lentil soup didn’t seem so delectable when he called you a b!tch. So, yes, you have some shared history, and he knows a lot about you. But how much deeper and consistently good could that knowing be if you were with the right person? Is that worth the patience to start again? If you believed the right partner is out there for you, would that be motivation enough to open up to a new person?

Some women try their level best to ignore the glaring pitfalls of a relationship because they don’t want to “fail,” don’t want to be alone, and don’t want to start over. If this resonates with you, drop me a line and let’s set up a time to talk about how I can help. As it turns out, most of these excuses are just that – excuses – and are getting in the way of creating a life you love.