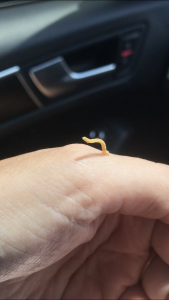 This little guy hitched a ride with me from the garden center.  As I watched him traverse the landscape of my hand, I couldn’t help but notice that he moved forward, “inching” along, then stopped and lifted his front end up. It was as if he was taking stock of his route, before proceeding, either in the same direction or a different one.

I was struck by the similarity between the inchworm’s process and ours when working toward a goal.

Do You Throw In the Towel?

A lot of times, women consider a goal, they think that they have to commit to a process that is unchangeable.  For instance, if you’re a woman who does not exercise but wants to become more fit, you might decide the best way to go about this is to do a cardio workout twice a week and strength training twice a week. What if you try this program, and it’s not enjoyable? What if it’s hard to get to the gym four times a week? If you’re like a lot of women, you may just throw in the towel, saying, “I can’t do this. It won’t work for me.”

In my therapy work with clients, we work on evaluating our goal-reaching process as it’s in motion. After we have a plan of action, we evaluate the process on a weekly basis. Were you able to go to the gym four times this week?

What worked, and what didn’t?

Should you pivot? Maybe two of the workouts can be home workouts after the kids are in bed. Maybe you should shoot for three exercise days instead of four.

It’s like the inchworm who pauses and looks around to see where he’s going before moving again.

Being flexible and adaptable with goals helps you reach them with more ease and less frustration.

Therapy helps with creating goals, evaluating them, and realigning.

I teach smart women how to expand in the areas of health, wealth, and love in part by creating and following through on their intentions. By not just giving up when things don’t go as planned. If this is something you’d like to explore, tap this link for a free consultation call!